The Surprise Rodent: Pets as Presents


13 July, 2017

Breeding | Hamster Care | Rehoming

0
Four years ago I made the poster that’s the picture at the top of the post: “pets aren’t presents”. I’ve shared it on my Facebook page, often around Christmas, and have had mostly positive feedback, but have at times had comments from people who have bought hamsters as presents – from me. So, I’ve rehomed hamsters to be presents; do I still believe what I put on the poster? Yes, mostly, but … also no!

Let me tell you about Princess Sparkle. She was a Chinese hamster who was unwanted and was bought by two housemates. The third housemate’s birthday was approaching and she liked small cute things, so what better gift? On the birthday they were excited and led her into a room to reveal their surprise present. They popped the hamster in the hamster ball and put her on the recipient’s lap. The recipient was not thrilled by the gift, in fact it turns out she was terrified of rodents. The recipient, a friend of mine, brought Sparky to live with me (at great expense as it was quite a journey) and she was my first foray into owning more than one hamster at once. I like to joke with my rodentphobic friend that it’s all her fault that a decade later I now have a room full of hamsters as she helped me break my ‘one hamster at a time’ rule!

This sort of gift buying – the Surprise Rodent – is definitely the type of pet present that I am not in favour of, for reasons clearly demonstrated in Sparky’s story. I include in the Surprise Rodent category, hamsters bought by people for other people’s children where the child’s parents have not been consulted as it’s the adults who legally are responsible.

I have, however, rehomed hamsters as birthday and Christmas presents happily. Let me explain why. These were Planned Presents. Months before the date the parents contacted me and were careful to explain the thought that had gone into the decision to get a pet, and the planning and research they had already undertaken. Both parent and child knew a hamster gift was planned.

I sent a ‘hamster voucher’ to the parents to print out and give on the celebratory day along with the cage and accessories. 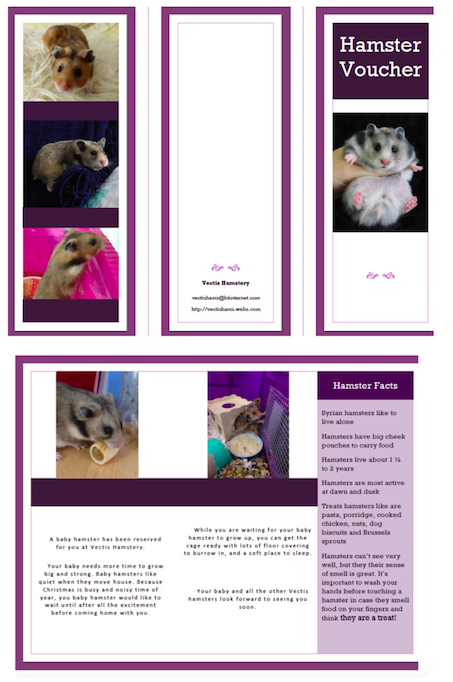 I’ve been sent some lovely photos of excited young people unwrapping their hamster cages and setting it all up ready for their new additions. Hamster collection was arranged after any parties or, in the case of Christmas, in the New Year when the holiday season was over.

I haven’t always had pups available at the right time for other people, but when I have the Planned Presents have worked well. The hamsters have been so well loved. So thank you to all of my Planned Present owners for the thought you put in. Please, don’t think my “pets aren’t presents” poster is directed at you!

You have Successfully Subscribed!

We hate SPAM and promise to keep your email address safe

Enter your email to keep in touch

You have Successfully Subscribed!

We hate SPAM and promise to keep your email address safe